After an impressive win against Villarreal CF at home, Barcelona travels away to Vigo to face a historically difficult game against Celta Vigo in La Liga. This will be Ronaldo Koeman’s first test away as a manager, and considering Barcelona’s weakness away since 2016/17, this should be an interesting game for the blaugranes.

Barcelona beat Villarreal 4-0 at the Camp Nou with a brace from the youngster Ansu Fati, a goal from captain Lionel Messi and an own-goal from Pau Torres. Players like Jordi Alba, Frenkie De Jong and Philippe Coutinho had especially good games as well. The performance was good throughout, with De Jong and Pjanic fitting in well with the double-pivot, Alba and Roberto pushing up high and Ansu Fati’s mercurial performance on the wings.

Celta Vigo comes in from one win and two draws, beating Valencia 2-1 with a brace from Iago Aspas. They drew 0-0 with Eibar and 1-1 with Real Valladolid with a goal from Iago Aspas. Currently, they stand in 8th place in the table.

The last time the two sides played out, they drew 2-2  that made Barcelona lose out on their title hopes. This time, playing them earlier and beating a difficult team at our bogey stadium will give the team hope for the rest of the season.

This is the team that Ronald Koeman has set to travel to Celta Vigo’s Estadio de Balaidos: 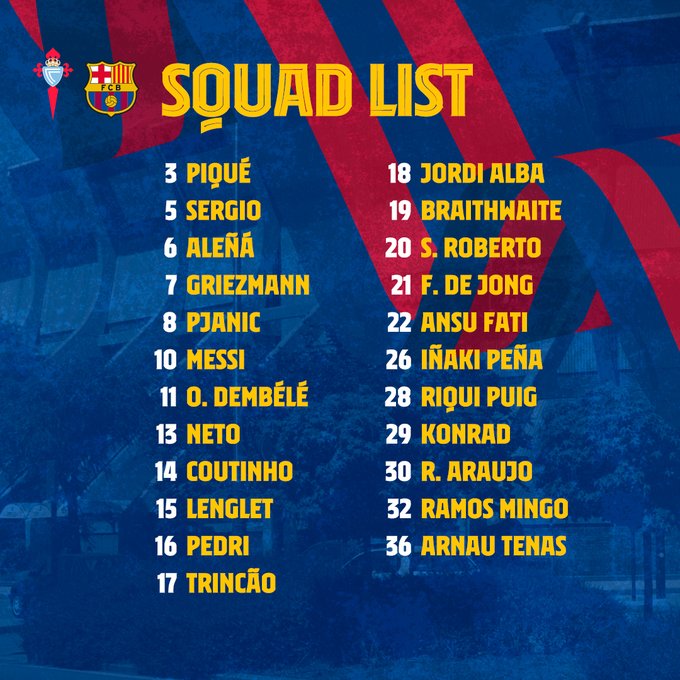 Considering a solid performance at the back last week, I expect the defence to be more of the same against Celta Vigo. Neto starts in goal, with Gerard Pique and Clement Lenglet in central defence. After a stellar game from the Spaniard, Jordi Alba should start at left-back. Sergi Roberto is the club’s only available right-back at the moment but should change after Dest cleared his medical today.

In midfield, Koeman plays a double-pivot to bring the best out of Frenkie De Jong, and the Dutchman should start as one of the midfielders. Alongside him, I expect Miralem Pjanic to start after a good showing as a substitute. Sergio Busquets did not have a strong game and should not feature unless Pjanic isn’t fit to play the full 90 minutes. Riqui Puig and Carles Aleña are available as more progressive options in the double-pivot as well and might play in that position.

The attack is a difficult pick for Koeman. Trincao, Pedri and Ousmane Dembele featured as substitutes but should be eyeing a first start to the season. Ansu Fati is unmovable after his imperial performances over the weekend, with captain Lionel Messi set to feature as a false nine as well. I believe Coutinho will start at attacking midfield and be substituted for Pedri later on in the game unless he shines. The problem is in the right-wing. Griezmann was arguably poor, although he has been crucial off the ball, he hasn’t put his scoring boots on, which Cules are waiting to see. Still, I believe that Dembele should come on earlier if Griezmann’s profile doesn’t fit in the game’s needs.

I don’t expect this game to be a high-scoring one, as Barcelona are weaker away and Celta Vigo is their bogey team away. Still, Barcelona should come home with this fairly.