“Diego Maradona looked almost in tears there; he’s roundly booed here in Barcelona. What a tragic end to Maradona’s World Cup. He’s about to come and play in Barcelona, but this must be the most tragic moment of his career so far.”

In many ways, this extract from John Helm’s commentary of Maradona’s red card at the 1982 World Cup, partnered with the forward’s spell at Camp Nou which closely followed, succinctly summarises Argentina’s football history in relation to the Catalan capital.

When it comes to sporting the red and blue of Blaugrana, the quartet of Argentines to have done so have all achieved palatial success, some more than others, Maradona included. However, when it comes to representing their country – be it for La Albiceleste or an Argentine club – they have a backlog of despair and disappointment.

In partnership with Barca Times and as part of our Connections series, we take a plunge into the events that entwine this esteemed footballing city and country.

Heading into the 1982 World as mentioned above Cup, Argentina were among the favourites to defend the title they won in their home nation four years prior. However, Cesar Luis Menotti’s men stumbled upon somewhat of a cursed city throughout their stint in Spain.

Kempes, Maradona and co. were tipped to top a first group consisting of Belgium, Hungary and El Salvador comfortably, but it was the Belgians who looked homely in their opening fixture at Camp Nou. Erwin Vandenbergh’s goal on the hour mark was the difference in a 1-0 result which flattered an uninspiring Argentina.

Luckily for La Albiceleste, their next two games were played some 250 miles south of Barcelona in Alicante. So the two routine wins that followed were much more recognisable of the fluid, ferocious side of ’78.

Onto the second group stage, Italy and Brazil were standing between Argentina and the final four. The scene for these three classic encounters? You already know the rest.

When the anticipation, the angst was greater than ever, Espanyol’s Estadi de Sarria overlooked as the waves of white and sky blue drowned in royal blue, and then yellow, as their dreams were dismantled in Barcelona once more. Three games across the city; three terrible performances and three defeats saw the holders holding on to little but pride and past memories.

Argentina were out, and having never returned to Barcelona for a fixture since the curse of a city stays sandwiched firmly between their two triumphs on the world stage. After reclaiming the trophy in 1986, all was thankfully forgotten of their catastrophic time on Catalan soil.

Whilst meetings between FC Barcelona and Argentine opponents have been somewhat of a rarity throughout history, and there’s no doubt about the importance of each encounter when they arise.

We traverse to 2009 for the first encounter between the Blaugrana and a Primera Division representative. Alejandro Sabella, a name familiar with fans of Leeds United and Sheffield United took charge of an Estudiantes side that boasted the likes of Juan Sebastian Veron, Enzo Perez and a teenage Marcos Rojo in their ranks. As expected, however, Barca were a quite different, quite frightening prospect.

Having added the league and cup double to their Champions League win the previous season, as well as heading to Abu Dhabi 13 games unbeaten; Henry, Messi, Ibrahimovic working in tandem under Pep Guardiola’s tutelage and Xavi and Iniesta’s service. Need I say more? They were swinging joyously from the top of the world football tree with no one in sight below them.

After seeing off South Korea’s Pohang Steelers and Mexico’s Atlante respectively in the semi-final, Estudiantes and Barcelona were prepared to battle it out for another to add to the cabinet, and as the opening exchanges proved, it wasn’t to be as comfortable as many predicted for the Blaugrana.
As they looked to replicate their 1968 Intercontinental Cup triumph, El Leon shut Guardiola’s golden boys out early on before taking a shock lead into half time courtesy of a magnificent Mauro Boselli header. 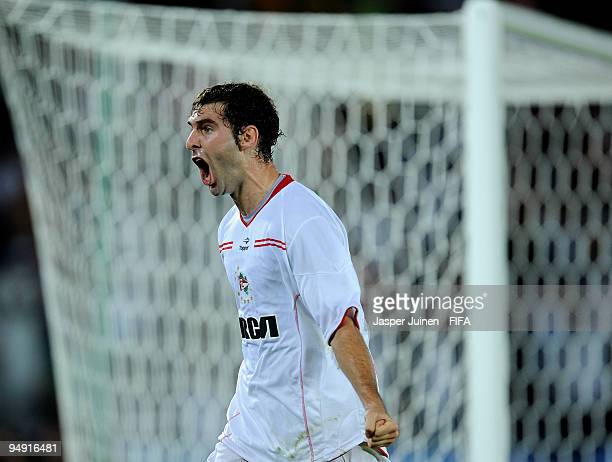 After the break, Estudiantes thwarted everything Barca threw their way as Pedro and Yaya Toure were added to the star-studded lineup, but with a minute of normal time to play, the former popped up with an unlikely header to extend the tie into extra time.

The Argentines slowly began to drop deeper and deeper as Xavi and co. Drained the life, the desire from them in trademark fashion before their very own Argentinian, Lionel Messi snuck past the snoozing defence to steer home Dani Alves’ cross. It wasn’t pretty, or even typically phenomenal, but it was the formula that brought a record sixth trophy of the 2009 calendar year.

The river swamped by Spanish supremacy

Six years on, Asia was once again the venue, specifically the Nissan Stadium in Yokohoma, Japan as it was River Plate’s turn to take on Europe’s treble-winning kingpins.

Another cold-blooded, incomparable collective donned the blue and red of Barca. In place of Henry and Zlatan were Neymar and Suarez for a side who were equally expectant heading into the CWC final. Without a loss in 15 games, and with a mile-long desolate road in their rearview mirror, the Catalan colossus did, on this occasion, display their devastating dominance of world football.

After a tense first half-hour, it was inevitable that Messi would open the scoring against his compatriots. Although, on the day, he could and probably should have scored three. That didn’t matter, however, as Luis Suarez netted a brace to brush La Banda aside for their fifth trophy of the year. 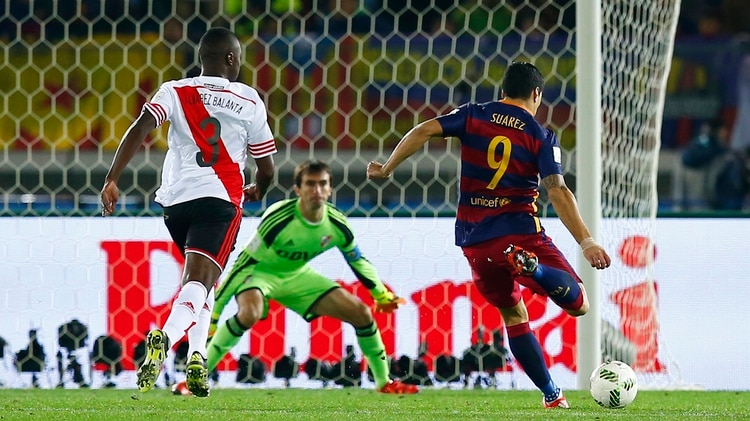 Though it was a disappointing display from a River Plate perspective, especially on one of manager Marcelo Gallardo’s first moments in the shop window for European clubs, the 44-year-old’s impressive work since has sparked interest from Barcelona.

Whether the deal will eventually come to fruition remains to be seen, but with Barca’s rich history with Argentina’s hottest prospects, it’s safe to say Gallardo would be on the right end of many a medal ceremony if he were to take the golden path paved by Maradona and Messi.

Melanie Serrano & Barcelona, The Club of Her Life

The History of Barça Kits